The weather seems to have become totally unpredictable these days the world over. Right across the other side of the world, I hear stories of spring not quite having sprung yet and of temperatures being lower than they ought to be at this time of the year. In my part of the world, it’s hotter than it ought to be, and it’s also extremely sticky where I live because of an average 80% humidity most days.

This is when all those street carts selling tender coconut water, freshly pressed sugar cane juice or other fruit juices, ice lollies and ice creams all do really brisk business. Given the unusually higher temperatures this year, there’s going to be a boost in business for them.

There’s no doubt that if there was to be a season for ice cream, this is it. Talking about ice cream takes me back to my childhood and eating milky ice cream at the Milk Co-operative at Calicut, now known as Kozhikode (in Kerala)

I’m talking about a time that goes back to over 30 years ago. Kozhikode, a town famously tied to the arrival of Vasco de Gama in India, was where both sets of my grandparents lived and where my parents grew up. My grandparents belonged to a generation that never ate out in a restaurant if they could help it (which really was almost never) because one was never sure about the quality of food and if it was prepared within the guidelines of strict vegetarianism.

The one exception to this not-eating-out rule, as far as my maternal grandmother (who we called Ammamma, meaning mother’s mother) was the visit to the Milk Co-operative Ice cream Parlour that was housed in a small store near the then famous Apsara Theatre. Ammamma loved the egg-free ice cream they served as much as we did. Even though the South of India is hot in summer, ice cream or frozen treats were not a part of our traditional food culture. My grandmother never even had or used a refrigerator in her life time either.

The Milk Co-operative would convert the excess milk they had that was unsold at the end of the day, into ice cream. When I think back there was nothing very remarkable about that ice cream other than it was a rare treat in a time when eating out was considered something that decent people did not do. In those days, if you wanted ice cream, you went to where it was sold, ate it there and came back home. Tubs or packs of ice cream to take back home were unheard of and refrigerators were rare in homes because every meal was cooked fresh and nothing in the kitchen was ever kept for the next day.

The Ice cream Parlour was a 15 minute walk from my grandparents’ home, and on the occasional summer evening Ammamma would take us kids there. Once there, she would order the ice cream for all of us. We would sit on aluminium chairs arranged around a table that was part of a group of three or four tables in the “parlour” area of a large room that also functioned as a storage area for large milk cans and other such stuff that was used in the daily business of milk delivery to the nearby areas.

Waiting for the ice cream to arrive was unbearable. Ammamma would remind us to savour our ice cream by putting small spoons of ice cream on our tongues and not letting it sit on our teeth for too long. She had this theory that teeth should never be subjected to extremes of temperature. Maybe she was on to something there because I remember her visiting the dentist only once in her 80 years of life and even that was sometime in her late 60s to get her teeth cleaned!

Our egg-free ice cream would finally arrive as single scoops with no embellishments in cheap, thick ice cream bowls with spoons. We didn’t care about any of that and were only concerned with digging into the milky ice-cream that tasted of nothing but milk, sugar and tongue numbing cold before it melted in the summer heat. We never thought of asking for seconds, and were just happy to have been indulged.

Today, ice creams have come a long way from those days when we were kids. Now we’re spoilt for choice in flavours, toppings and presentation but they don’t seem to bring me the pleasure of the ice cream from my childhood. Of course, that could just be nostalgia taking over.

Last week, my husband and daughter were away from home for a couple of days and I ended up with a bit of extra milk piled up in the fridge. Out here, our milk gets delivered to our doorstep daily and I didn’t get around to asking for less milk to be delivered while they were away. I was looking a way to use up the milk and ice cream was the perfect solution as I could make it and have it frozen and ready to eat by the tie they got back home.

I was flipping through David Lebovitz’s book, The Perfect Scoop, looking for a suitable recipe or idea when his Dried Apricot Pistachio Ice cream caught my attention. He does say that the best dried apricots to use are those from California and that Turkish and Chinese ones which look better are very sweet and do not have as intense a flavour. I wouldn’t know, but I do know that I like the Turkish dried apricots I get here. They’re a slightly tangy and a bit sweet and sometimes one just has to make do with what one has.

I don’t have an ice cream maker so I make my ice creams by hand using a hand blender to mix the ice cream mixture a couple of times during the chilling period to prevent crystals forming in the ice cream.

“Without ice cream, there would be darkness and chaos.” ― Don Kardong.

This recipe is adapted from David Lebovitz’s Perfect Scoop. 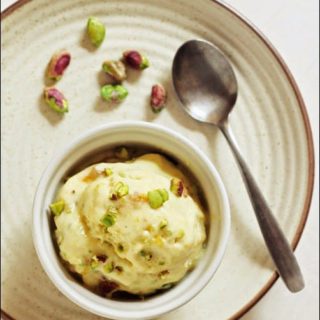