Apparently yesterday, the 3rd of November was National Sandwich Day. The National refers to the U.S. naturally, but that doesn’t mean you can’t honour and celebrate the sandwich if you aren’t in the U.S, especially if you love sandwiches.

I do and I’m sure that it’s still the 3rd of November somewhere in the world so here’s my humble offering for celebrating the food that’s a sandwich – a vegetarian Cemita Peublan Style Sandwich with Green Tomato Salsa Verde.

That might seem like a mouth full (in more ways than one) but it’s a very simple sandwich made out of home-made Mexican Cemita Buns. These buns are really good and you should try making them if you can. If you can’t be bothered with Cemita buns, use sesame topped burger buns instead for an awesome sandwich.

Mexican Cemita Buns are used to make a sandwich which is very popular in the Puebla region of the country. I understand that some people even call the Cemita Sandwich the “King of Mexican sandwiches”! There they make the Cemitas Poblana, which is a sandwich is filled with sliced avocado, meat, Queso Oaxaca or Quesillo (a string cheese sold as balls) or Panela cheese (fresh cow’s milk cheese), onions, a strongly flavoured almost floral herb called pápalo (supposedly a cross between arugula and coriander in flavour) and a red Chipotle sauce.

If you went to Puebla and talked about a Cemita without meat, I’m assuming they would probably wonder what you were talking about. At least, that’s the reaction I’ve encountered many times when I’m in a predominantly non-vegetarian culture and I mention I’m vegetarian!

I wanted to make a vegetarian Cemita Sandwich but strike a balance between being vegetarian, and keeping as close to the spirit of a Pueblan Cemita as I could in my sandwich while dealing with the reality of not being able to source many of the essential ingredients.

I was inspired by this detailed article on Serious Eats about Publan Cemitas where Daniel Gritzer declares his love for the Cemita Sandwich and I quote, “the New York cemita and I are not in an exclusive, forever-happily-ever-after relationship. No, we have a more unorthodox thing going, because I also share my emotions and loyalty with the Pueblan cemita. That’s right, I’m in an open cemita relationship, and I am not ashamed to admit it.”

So I picked out a few ingredients that I could find and knew we liked, to put into my Cemita Sandwich. A lot of people often use mushroom or tofu as a replacement for meat when making something vegetarian, but we don’t really like mushrooms much and are happy to give tofu a miss.

I went with pickled jalapeno peppers instead of chipotles, avocado which is apparently a must here, fresh coriander/ cilantro instead of the Mexican herb pápalo, red onions, and Mozarella instead of Mexican string cheese. I also added some sliced red bell pepper for colour and flavour, though it’s not something you’d normally find in a Cemita Sandwich.

It seems that Cemita Sandwich makers in New York like to toast the two halves of the bun on a griddle or pan and though that’s not the Pueblan way of doing it, I thought I’d try that out.

I also decided to add a little more “freshness” to my Cemita Sandwich with a Green Tomato Salsa Verde as a sauce. “Verde” means green and that is what this particular Salsa is. This is the season for green tomatoes here and I love to use them however I can. 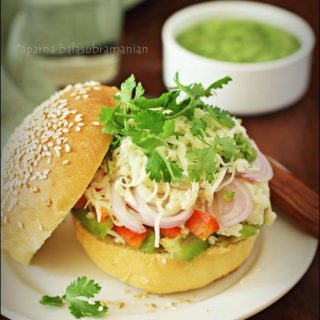 For the Green Tomato Salsa Verde: