As many of you would know, India is a huge country and though it mostly enjoys a tropical climate in reality we actually have six different major climatic zones! So while those of us in the south live in a hot humid climate and have never seen snow here, those who live in northern most parts of India have a clear summer and a winter when it snows.

In my childhood, vacations back home to the south of India bring back memories of fruit like mangoes, bananas, jackfruit, guavas, papaya and stuff like apples and pears existed only in our picture books. I never even dreamed that these were growing well and being eaten in the northern states of the same country that we were in.

Much improved storage and transport systems today mean that Indians in the south now routinely enjoy fruit from the north and vice versa. Forget about fruit grown in India, locally grown fruit jostling for shelf space with imported fruit is a routine affair in our markets.

I always thought of figs as exotic fruit from the Middle-East or thereabouts for a long time. The first time I met a fig, I didn’t even know what it was. Which wasn’t surprising since what I saw was a brown, chewy, funny tasting square which left me with a crunchy-gritty feeling in my mouth. When I asked what this sweet was made of, I was told “Anjir” which left me no wiser. I later discovered that “Anjir” was figs, usually the dried variety which came as brown and chewy discs strung together on rope/ cord.

I was just reading something which probably points towards figs having come into India from Turkey or thereabouts. This is just surmise on my part and I haven’t seen anything to back this up so far. It turns out that they make a green fig (unripe ones) jam in Turkey which is called “Incir Reçeli” which is pronounced as “in-jeer reh-CHEH-lee. So now I know where the word “Anjir” which is Hindi for figs, comes from!

I saw my first fresh fig about 3 years ago when they started making an appearance at my market. For some strange reason, I’m the only one in our home who likes the fruit. I understand that figs have two seasons a year but they’re available here only for a very short 3 weeks or so every January-February though dried figs are available in shops throughout the year.

I cannot resist buying figs, so when the season arrives I tend to look for ways not just to disguisethem so that my family will enjoy them too but also ways to preserve them. Figs are fruit that don’t keep too well anyways and so need to be used very quickly.

I first made this preserve during last year’s fig season but never got around to blogging about it. At that time, I also had some pears that needed to be used up so I made this preserve with figs and those pears and some spices. I like my preserves to be something beyond fruit and sugar and so my hands always reach for whatever spices I have on my kitchen shelf, which would go with whatever I am preserving.

The Lebanese typically make a fresh fig murabba/ m’rabba (In India too, we refer to fruit preserved in a sugar syrup as murabba!)) by adding walnuts and toasted sesame seeds for a delightful nutty flavour. I left out the walnuts but decided to add the toasted sesame seeds to my Fig and Pear Preserves too.

Fig And Pear Preserves With Honey, Ginger And Sesame Seeds. 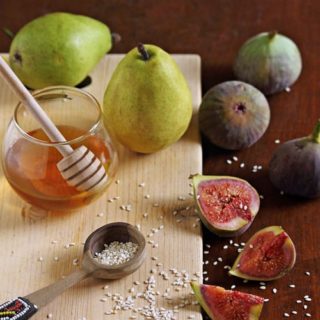