I was at the market the other day, when I came across some very pretty looking lettuce, which I had never seen before. I am not very fond of salads (though I like the Indian versions like kosmalli/ koshimbir, raithas/ pachadi) and lettuce is probably my least favourite part of salads. Yet this particular lettuce was so attractive that I bought some, even though a little voice in my head kept telling me that I really shouldn’t spend good money on something we don’t like.

After coming home, I tried to figure out just what sort of lettuce I had bought. It looks like my lettuce goes by the name of “Lollo Rosso”, and it features in this salad recipe. Does anyone know much about this lettuce and what else I could do with it other than use it in salad? I would appreciate any suggestion or more information.

My lettuce looks like some exotic coral and has ruffled light green leaves with a deep reddish brown colour towards the edge of the leaves.

Some days back, a friend who just discovered my blog and seems to be following it, asked if I could post something which was a bit sweet, had some nuts, was healthy and low on calories. I promised her I would think of something during the weekend, so M (I’m not sure she would want to see her name on the net), this salad is for you.

I had to use up the lettuce, and just made this salad by adding ingredients that I had on hand. I kept adding a bit of this and that, and so I have listed only approximate quantities. Do increase or decrease them according to your preference. 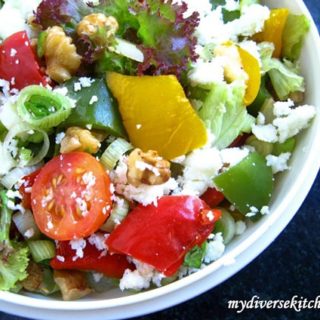 I was at the market the other day, when I came across some very pretty looking lettuce, which I had never seen before. I am not very fond of salads (though I like the Indian versions like kosmalli/ koshimbir
Print Recipe Pin Recipe
Cuisine global vegetarian
Servings 3 serving