This month the Bread Baking Babes are baking Birotes Salados, a sourdough bread roll from the Mexican city of Guadalajara. Karen chose the recipe from Bread on the Table by David Norman. My family does like sourdough bread, but they bur prefer regular bread to sourdough. Too much of it and the conversation turns to how it’s time we had regular yeast bread for a change. I reached a halfway compromise of making My Non-Sourdough Birotes Salados using a pre-ferment.

Birotes Salados are rarely found outside Guadalajara in Mexico. This bread roll is used to make Tortas Ahogadas, or “drowned” sandwiches. These sandwiches are made with shredded pork, pickled onions, and refried beans. A spicy sauce is poured over the sandwich “drowning” it. The very crunchy thick crust but soft interior holds up well to this drowning with sauce. It is also considered to be a hangover cure locally. If you’re new to this bread like I am, it’s a good idea to take a look at how it is made back in Guadalajara.

The Birote Salados is thought to date back to 1864 during the rule of Emperor Maximilian of Mexico. It is said that the bread gets its name from Camille Pirotte, a Belgian soldier sent down to Mexico by the French Army. Pirotte was also a baker who was to teach the locals how to make French bread. However he couldn’t find any yeast locally. So he developed a sourdough method to make bread using locally available ingredients.  When the French army left Mexico, Pirotte stayed back Guadalajara and opened a bakery. 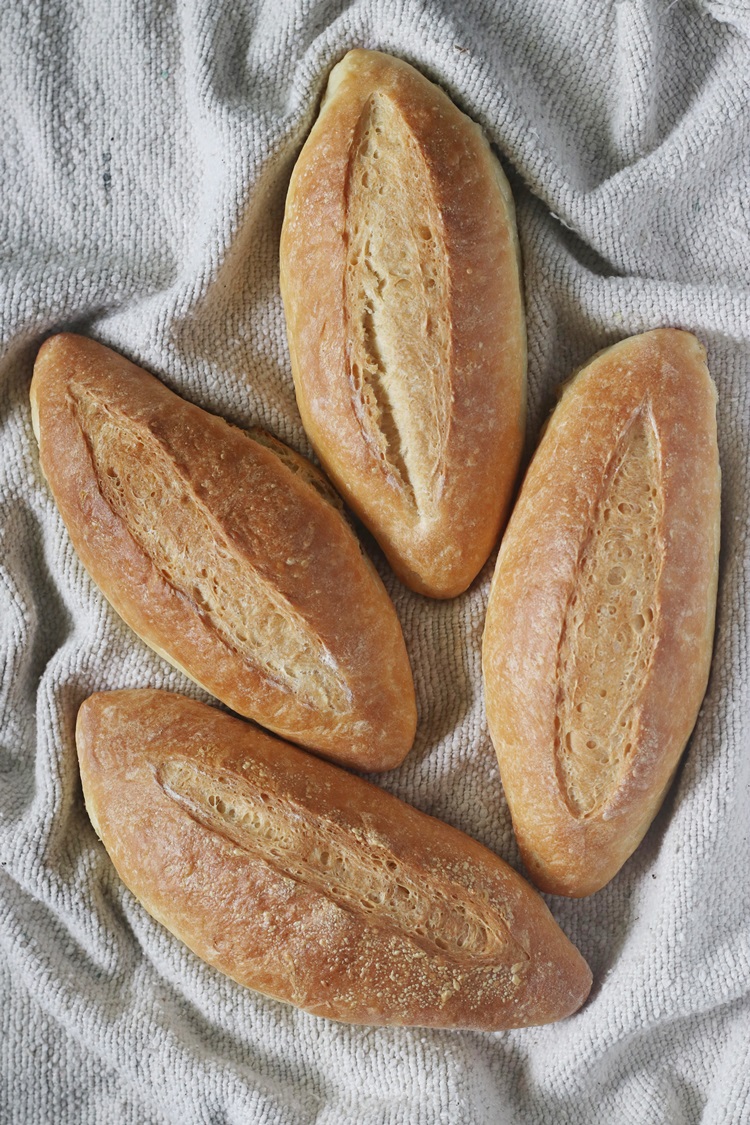 The Birote is unusual in that it is made with a sourdough starter that is traditionally made and refreshed with beer, lime juice and eggs.  Lime juice is supposed to add lightness and volume to yeast breads. The name Birote is used interchangeably with Bolillo. Though both are similar kind of thick and crusty bread rolls, the Birote is saltier and a much heartier bread. Birote bread rolls are also used to make hot sandwiches called Lonches sold in Guadalajara. These are usually filled with things like shredded pork leg, breaded meat, chorizo or panela cheese. This bread is also used to make Molletes, a breakfast beans and cheese sandwich.

As I mentioned earlier, I made my Birotes Salados with a pre-ferment. There’s a recipe in the Vegan Mexico by Jason Wyrick that makes them this way. That recipe uses a 6 hour old poolish or pre-ferment. I made mine late at night (about 10.30pm) the night previous to the day I baked these rolls. My bread dough mixing started at about 8.00 the next morning so I had a well risen 10 hour old pre-ferment. I also added a bit of lime juice and an egg while kneading the dough in the spirit of the original Guadalajaran recipes. Lime juice is supposed to help yeast work its magic and lends softness to the bread. Be a little light handed with it though, as a little lime juice goes a long way. Too much lime juice can kill the yeast!

I used whole wheat flour for my pre-ferment which is not very authentic. I shaped this dough to make 4 rolls which are quite large and hearty. You might choose to shape them into 5 or 6 slightly smaller rolls. Double the recipe for more Birotes. Also a word about slashing/ scoring the dough. The slashes should be about 1 cm deep. If they’re too shallow, they don’t open up well when baking and slashing them too deep is another problem entirely. These rolls are best eaten the same day they’re made, though they’re not bad a day later. Please see Karen’s recipe for the original sourdough version of these rolls.