So here we are in the first month of 2015, and the third year of the bread baking group, We Knead To Bake. When I got the group going, my only thought was that it would be nice to bake bread with a group and would keep me motivated to try new breads regularly. I never thought that we would still be going strong three years from then.

Most people are probably recovering from celebrating the festive season and minds naturally turn back towards eating more sensibly. Bread still is a load of carbs but to my mind healthy eating is about eating as balanced a meal as possible and that includes carbs. Of course, it’s another matter entirely that I love bread and don’t need an excuse to make and eat it!

Anyways, what we do in this group is bake bread. So this month we’re baking a simple semolina bread crusted with sesame seeds and called Pan Siciliano. If you really need convincing to bake this bread, then let me assure you it goes very well with soup and a salad.

On the 13thof December every year, feasts are held in Sicily and around the world celebrating the bravery of Santa Lucia. One way is by baking a special bread which is known as Pan Siciliano. What is different about this bread is that it is made with semolina (what we know in India as rava/ sooji). In Sicily (and Italy), the semolina used for this bread is a specific grind of durum wheat called “semola di grano duro rimacinato” or just “rimacinato”, which translates as ‘ground again’. This refers to semolina which is ground once more to break the coarser grain into finer flour for bread.

If you can find rimancinato where you live, then go ahead and use that for this Pane Siciliano. Otherwise use the finest grind semolina you can find which is what I did. In India, there’s a variety of semolina that is very fine (but still grainy) that’s used for making laddoos, halwa and batters. Otherwise, just run the regular semolina you have, the kind used to make “upuma”, in the chutney jar of your mixer-grinder or coffee grinder till it’s as fine as you can grind it.

Though there are a lot of recipes out there for making this bread in a shorter time, traditionally this bread is made using a pre-ferment which the Sicilians/ Italians call “cresciuta”. This produces a more flavourful loaf of bread and isn’t all that much more work than a recipe without the pre-ferment. This particular Pan Siciliano recipe calls for gluten which improves the texture of the loaf. If you do not have it, leave it out.

The Pane Siciliano is generally shaped into one of two shapes – the “Occhi di Santa Lucia” meaning the “Eyes of St.Lucia” or the “Mafalda” meaning “Snake”. I chose to make the “Mafalda” as I had earlier baked St. Lucia rolls in the “occhi” shape, and I had never tried shaping my bread into a snake!

To form the Occhi di Santa Lucia or a scroll shaped loaf of bread, roll the bread dough into a long rope and lay it out straight. Then coil it from each end in opposite directions. (Please see my post on making St. Lucia Buns for a detailed pictorial for this kind of shaping )

The Mafalda produces a rather odd looking bread, but if you’d like to shape your bread like this, then wind the rope of dough back and forth on itself a few times, leaving about 7” for a “tail” to lie over the top.

This video of Mary Ann Esposito making the Pane Siciliano with Peter Reinhart is quite helpful, and worth taking a look at. 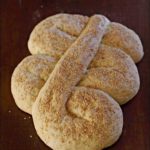