was somewhere in my mid-teens when my parents, sister and I spent two days in Athens on a stop-over on our once-in-two-years vacation back home to India. In those days, my concerns about food largely revolved around eating when I was hungry and though I did have my particular likes and dislikes, I hadn’t developed an interest in food that I have today. What I now remember from that trip is the sheer grandeur of Acropolis and a beautifully embroidered Greek cotton dress that I loved and wore until it was almost in tatters!

In those days, living outside India meant that we visited India once every two years during the 2 months of our summer vacations and our trips in always meant that we had to make short stop-overs in various European countries because there weren’t any direct flights over that distance. These stop-overs mostly meant we spent two days or so as transit tourists in the country of whichever airlines we were flying. Our short transit stays were just enough time to catch a conducted tour to see the local sights, get a whiff of the local culture and pick up a few mementos to take back home.

We have a lot of interesting food related storied from those times because it wasn’t easy travelling anywhere abroad as a vegetarian. Most of the places we lived in or visited were meat and fish centric cultures where vegetarians like us were oddities. Yet people were always nice and anxious to accommodate our food choice but many were simply puzzled about what they could serve us.

I don’t seem to have any particular food memories from our trip to Athens which probably meant that we must have had plenty of vegetarian options. Now that I know a little more about Greek food I’m not surprised a lot of their native dishes are vegetarian, and many that aren’t can easily be adapted to vegetarianism. Like other Mediterranean cuisines, the Greeks use a lot of fresh and seasonal vegetables and fruit in their dishes.

Horiatiki is a rustic Greek salad (it seems the word Horiatiki means “in the manner of peasants”) that is naturally vegetarian. It’s typically made with roughly chopped onions, tomatoes, green bell peppers/ capsicum, cucumber and seasoned with Greek oregano, pepper and salt and topped off with some olives and a slab of Feta cheese. Drizzle a little olive oil and vinegar and you have a simple, fresh and hearty summer salad.

From what I understand, the above mentioned ingredients are what make a traditional (authentic) Greek salad and any other addition to it like yellow or red bell peppers (only green), lettuce, mint or other fresh herbs, etc. are personal preferences. Traditionally, the Feta is always placed on top of the salad in rectangular slab and never cut up into smaller pieces or crumbled, though that might be easier to eat.

Horiatiki or Greek Salad is best prepared and served fresh so the vegetables can be chopped/ sliced ahead and refrigerated ahead of time if necessary but tossed and plated just before it’s eaten.

I’m a believer in authenticity in recipes to an extent because some recipes have stood the test of time and it is always that particular combination of ingredients that makes a particular dish what it is and sometimes all experimenting does is take away from it. That said, I’m also a firm believer in adjusting recipes to suit one’s own tastes if need be, because there’s not much point in making something is no one likes it and will not eat it! Then most importantly, one has to substitute as best possible if ingredients for a recipe are just not available locally.

So feel free to use whatever vinegar you have available or even substitute it with lime/ lemon juice. Use whatever olives you have (whole or sliced) or leave them out altogether. If you cannot find Feta, use a cheese like Paneer which also is better if you’re trying to avoid salt. If you make your own Paneer, perhaps add a little salt to it and use that instead. Try adding some chopped apple or pear which blasphemy to the salad, I know, but the hint of sweet sits delightfully well with the saltiness of the Feta. 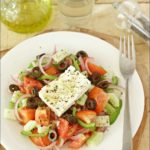 My Version of Horiatiki - A Rustic Greek Salad
A Greek salad of onions, tomatoes, green bell peppers/ capsicum, cucumber topped off with some olives and a slab of Feta cheese.
Ingredients
Servings: people
Instructions