In case you are wondering, we’re still very much vegetarian and haven’t taken to eating dogs! I also will not blame you for thinking that I might have stopped blogging altogether considering my last post here was almost 2 weeks back. Let me assure that I’m not planning to retire from posting here in the foreseeable future. I’m just taking some time settling back to regular posting.

St. Patrick’sDay has been and gone this year. We don’t celebrate it, but this is when the Irish, and others who do, make Soda Bread. Irish Soda Bread is a quick bread and very simple to make as it doesn’t require all the kneading and rising time that yeasted breads need. In fact, the less you knead it, the better it turns out!

Authentic Irish Soda Bread is apparently made with flour, baking soda, salt, and soured milk/ buttermilk. This was a recipe that became popular in the early 19thcentury in Ireland when poor conditions and non-availability of yeast meant making use of inexpensive and easily available ingredients. Irish folklore also insists that each round of Irish Soda Bread must have a 1/2″ cross (X) cut into the top of it, so that the devil (or fairies, if you chose to believe that instead) may escape the bread during baking!

It is interesting to note that Soda Bread wasn’t invented in Ireland, and the earliest documented use of baking soda in bread is by native American Indians! However, the Irish adopted it wholeheartedly and today Soda Bread is as Irish as is Guiness!

So if you have been making Soda Bread with baking soda, eggs, butter, caraway seeds, fruit, nuts and any other addenda, you might think it was Soda Bread but it doesn’t qualify for a traditional/ authentic recipe. That doesn’t mean that the Irish do not, traditionally, add other ingredients to the basic Soda Bread recipe. They do, but they just do not call it “Soda Bread”

If you’ve been adding fat, eggs, sugar and baking powder to your Soda Bread, technically it’s more of a “Soda Cake”! And when the Irish add raisins to their Soda Bread they call it a “Spotted Dog”, and I have no idea where the “dog” bit came from. If you chose to flatten your dough a a bit, cut your round of Soda Bread dough right through into 4 quarters like scones, and bake them in a griddle on the stove top then they’re “Farls”

My oven mitt came from Ireland and the recipe on it says “Real Irish Soda Bread” and contains the basic 4 ingredients as well as eggs, butter and baking powder. I can only conclude that once the difficult times were over, and butter and eggs became affordable, some Irish bread bakers decided to that the original Soda Bread could do with some improvement!

Irish Soda Bread is another one of those things I’ve been meaning to make for a long time now. I have spent time and effort making simple and not so simple yeasted breads but not this simple bread! We Indians believe there is a time for everything to happen, and I can only think that perhaps it is only now that the time was right for it!

Actually, I have to thank Sravanthi for motivating me to finally make Irish Soda Bread. She had recently been to Ireland and brought back a little something for me – an oven mitt decorated with green clover and a recipe for “real Irish Soda Bread”. That brought back to me that I still had not made Soda Bread and I decided to give it a go, using the recipe on the mitt.

So I decided to convert the recipe for the “Real Irish Soda Bread” into a “Spotted Dog” only to discover that I had run out of raisins! Now, I’m not Irish nor do I have a Soda Bread making tradition that I need to keep up, so I went ahead and substituted the raisins with dried blueberries. This version of Soda Bread is much like buttermilk scones, except that I liked the somewhat crumbly cakey texture and crunchy crust of this bread a whole lot better.

This Soda Bread or Spotted Dog is best eaten fresh, after it has cooled down a bit. Should you have left overs, it makes excellent toast the next morning. The recipe is actually an adapted and halved version of the mitt recipe. It serves 4 so if you want a bigger bread just double the quantity of the ingredients and bake about 10 to 15 minutes longer.

(Adapted from a recipe on my oven mitt!) 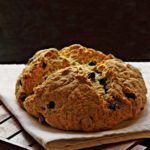 I’m sending this bread for Bread Baking Day which is being hosted at Paulchen's Food Blog with the theme of “Bread With Egg”.

This Soda Bread is also being YeastSpotted!