Its another Daring Bakers challenge and this time its something French. Our hosts this month, Meeta of What’s For Lunch, Honey? and Tony of Tony Tahhan set us to bake some chocolate éclairs from Chocolate Desserts by Pierre Hermé. Éclairs are made from baked choux pastry, filled with pastry cream and decorated on top with a chocolate glaze or ganache (I’m sure there are few of us who need this explanation). And for the first time since I joined the Daring Bakers, I really didn’t have any problems with the challenge. Everything turned out just right. I almost couldn’t believe it!

Another first for me. I know what chocolate éclairs are and have seen them decorating the shelves in many a bakery. But I have never eaten one before this challenge. As odd as this seems, I really don’t like cake or confectionery filled or decorated with cream or frosting/ icing and such sweet stuff. I have found the home-made versions of these quite nice, but even then I limit myself to small portions. The detailed challenge recipe can be found on the Daring Bakers website.

Cream Puff Dough: After hearing that many fellow DBs felt their Choux pastry had an “eggy” taste, I used 1 egg less because an “eggy” anything would no takers in my home. The Choux pastry was easy to make. The only problem was with piping them out.

I really did not have any idea as to how much they would puff up so I ended up piping out rather mini-sized éclairs and some profiteroles as well. I have a table top convection oven so I baked the éclairs and profiteroles at 190C (375F) for 25 minutes straight (they needed this long to brown) and then made small slits on the side as soon as they came out of the oven, to release the steam.

They did puff up really well with a huge empty pocket in each. I was quite thrilled to see that they came out well. Unfortunately, it was in the middle of the monsoons here and humidity is pretty high, so the profiteroles started becoming soft after a while. Looks the weather here is never appropriate for the month’s challenge. Usually I battle with weepy buttercreams because of the warm tropical temperatures!

Egg Free Chocolate & Orange Pastry Creams : Since we were allowed to experiment here (and given the number of eggs that went into the Choux), I decided to try making eggl free pastry creams. Being new to this, I searched the net for a good recipe but found only vegan versions, most of which used alternative ingredients not available here. So I came up with a recipe of my own. Nothing extraordinary, I just used the recipe provided and added some cornstarch and left out the eggs. I made a mocha version and an orange version. 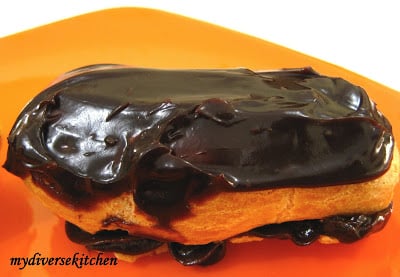 Its another Daring Bakers challenge and this time its something French. Our hosts this month, Meeta of What’s For Lunch, Honey? and Tony of Tony Tahhan set us to bake some chocolate
Print Recipe Pin Recipe
Course Dessert
Cuisine French

Ok, so I can make a good Choux pastry now, and without getting the “Choux on my shoes” as Alton Brown would say! I also have a recipe for Egg Free Pastry cream now. Not bad, I guess. Despite reducing one egg, we still got an “eggy” taste and smell from the éclairs, though the”eggy” taste did diminish a bit after filling the éclairs. So I don’t think I would make these, unless I can find an egg free recipe or one that uses maybe 1 egg, but I guess then it wouldn’t be quite a Choux pastry. Personally, even then, I’m not sure I would be able to manage the amount of pastry cream that goes into each even with the temptation of the chocolate. But I’m sure my husband and daughter would definitely be ready to try the eggless version. I’m going to be checking the eggless versions that our alternative/ vegan Daring Bakers would have come up with. I have to thank Meeta and Tony for expanding my baking repertoire with this challenge; after all, I am a Choux Pastry maker now! Do step across to my fellow Daring Bakers blogs to see some very creatively presented Eclairs and keep watching for what we’re going to be baking next month. See you all then.
Previous Post: « Multi-Wholegrain Flour Bread
Next Post: Announcing WBB: “Grains in my Breakfast” »